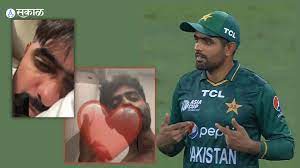 KABARHEADLINE.COM - Currently Pakistani cricket captain Babar Azam is hit by a scandal, this is due to the circulation of a viral video of Babar Azam having sex.

The viral video of Babar Azam has been circulating on social media following the successive defeats of the Pakistan cricket team at home to England and New Zealand.

The alleged scandal initially went viral when Dr Nimo Yadav tweeted a video in the early hours of Monday morning.

The video of Babar Azam having sex that is circulating is allegedly done with a woman who is also a cricket player from Pakistan.

Quoted from Freepressjournal.in, it was stated that the video posted by Yadav came from Pakistan after it was shared through Yadav's media account.

“Babar Azam sexted the GF of another Pakistani cricketer and promised him that his girlfriend would not leave the team if he continued sexting with her was just “ Tweet Dr. Nimo Yadav.

The post was immediately attacked by supporters of Babar Azam regarding the viral video circulating. Babar's fans say the post is simply to defame a Pakistani cricketer.

A Pakistani journalist named Shoaib Jatt was also accused by Pakistan Cricket fans in connection with the leaking of the Babar Azam viral video.

Shoaib was accused by Pakistani cricket fans because the journalist was known to be a staunch critic of Babar Azam.

In addition, Babar Azam is not the first time he has been involved in a scandal like this. A woman named Hamiza Mukhtar also accused the Pakistani cricket captain of committing sexual harassment, harassment and extortion.

After an investigation Mukhtar dropped all charges and admitted that he had made false accusations against Babar Azam.